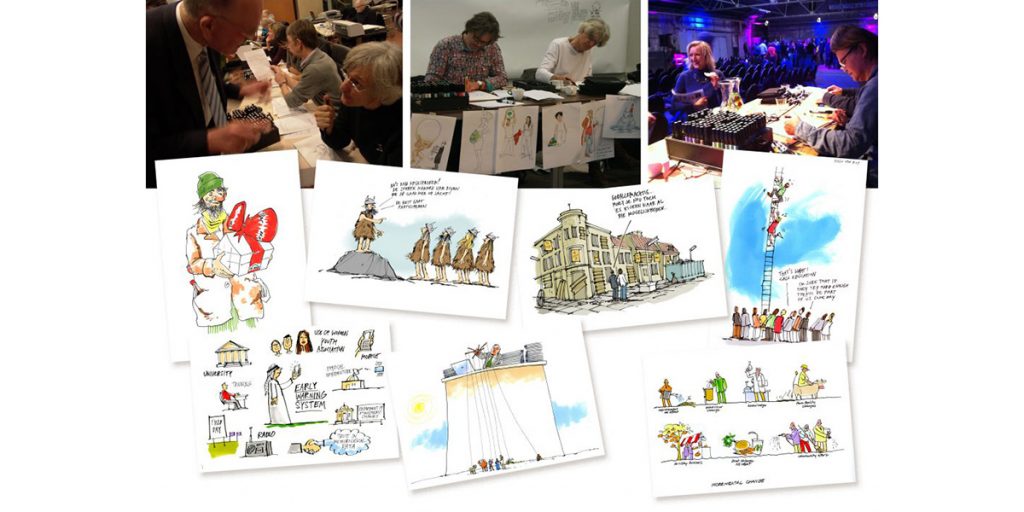 ILLUSTRATING DURING WORKSHOPS AND SEMINARS

A phenomenon that emerged at the beginning of this century. Fast illustrators who will turn your idea into an inspiring sketch. Or summarize your vision into an eye-catching cartoon. This is essential during brainstorming sessions. The illustrators of Lange Halen are the pioneers of this emerging profession.

For hosts and facilitators

Do you want to get as much information out of your guests as possible? Then put them to work. Lange Halen has years of experience with workshops in which the participants come up with the images themselves. Typically during these meetings there are multiple illustrators present. This gives the participants the opportunity to translate their visions into an image. That vision could be anything: a fantasy, an elaborate plan, a metaphor or a critical cartoon. Participants brief the illustrators, who start drawing at a fast pace, on their ideas. Afterwards the results will be shared and discussed. This approach requires good preparation. Lange Halen would love to take the time assist you in this process.

You can also allow the illustrators to do their own thing, walk around, listen, and draw. Throughout the day the illustrators will display their work on the walls, so that everyone can see what they observed. See how an outsider perceives your complications. A valuable addition to the program. And later usable for your documentation.

What is Lange Halen?

Lange Halen is a network of illustrators. Obviously they don’t just draw during sessions. And they all have their own websites. Take a look around.